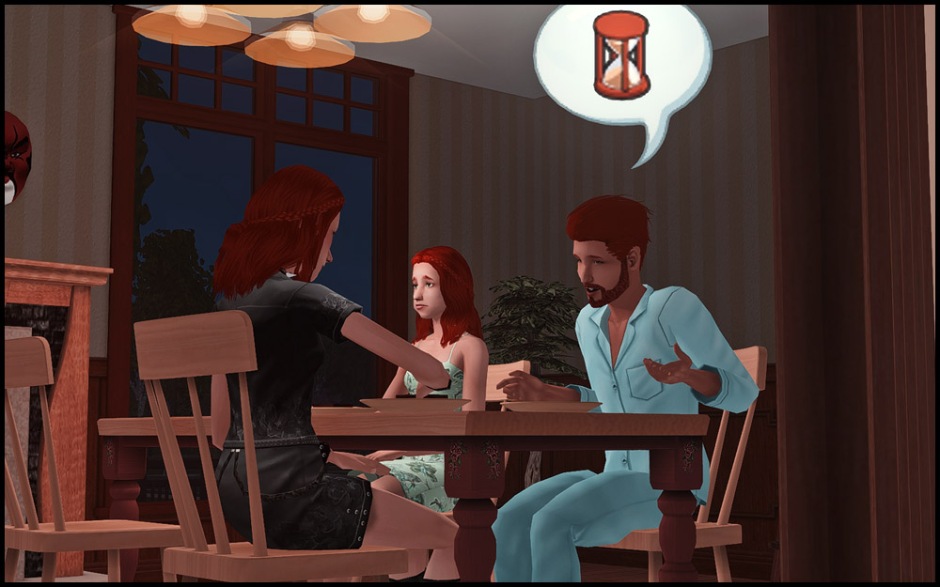 Last time, Daniel got busted with Kaylynn.  Dan and Mary-Sue put their differences aside long enough to hang out with the girls so that they could at least attempt to get over their mad.  Both girls learned to study.  Mary-Sue told Dustin to leave her daughter alone, which is probably why Angela chased him around during his house time.

Fall in love with Cass, Make out with 3  people, be friends with Dina and Willard, woohoo 3 sims, buy a hot tub.
Romance/Fortune
LTW:  Become Hall of Famer

Good luck with that one.

Mary-Sue at least wants to puff up the bank account, get a promotion and talk to someone and have a party.
Fortune/Knowledge
LTW: Become head of SCIA

Angela, go to uni, buy something they can’t afford, be bff’s with her sister’s boyfriend, meet someone new. 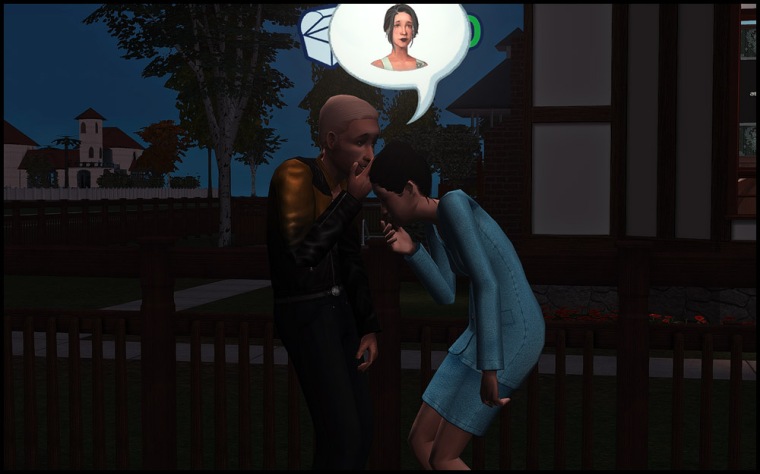 Outside, Mary-Sue talks with Phil and then rolls a want to talk with him.

Daniel:  I think you should have re-joined the politics career
Mary-Sue:  Having a cheating husband did not help my career.  I’m better off being a spy.

Daniel has no trouble getting back into the swing of things with his wife.

It’s not long before Mary-Sue completely forgives him for humiliating her.

And then invites him back to the bed for a nice romp before bed.

Daniel:  Your mom and I won’t be around forever.  I want you both to promise me that you’ll grow up well and do good in your life after high school.

Both girls roll their eyes, but they agree. 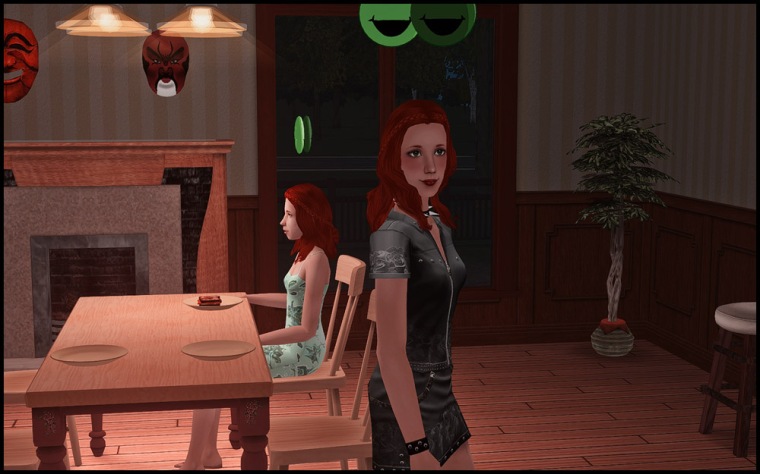 It was just enough for them to do this on their own.

The Pleasant family are actually pleasant to watch for once.  Mary-Sue is chatting with a random lady to get the friends needed for Daniel’s promotion.

Daniel ages up to elder and hopes he lives long enough to meet grandkids…or in all reality, woohoo in public with 3 sims, woohoo 3 sims and just woohoo.

Everyone is gone for the day.  Mary-Sue gains a random skill point in cooking that she wants while waiting for the carpool.

Angela is the first one to top her teen career.  I think Lilith comes home with level 2 promotion. 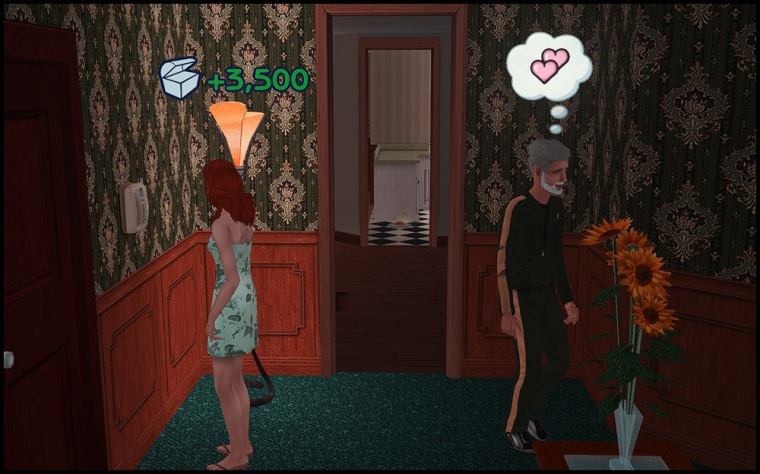 Daniel:  Why can’t you have a crush on this boy?  He’s acceptable to me.
Angela:  Just ignore my dad, Alex.  He’s a dumbass.

The girls wake up early on Saturday and they both want to swim, so they hang out in the pool for half the day.  Bladder and food needs do chase them indoors eventually.

Angela wanted to invite someone over and that someone is Alex.  He asked to bring a friend, probably because Thelma doesn’t trust the twins. 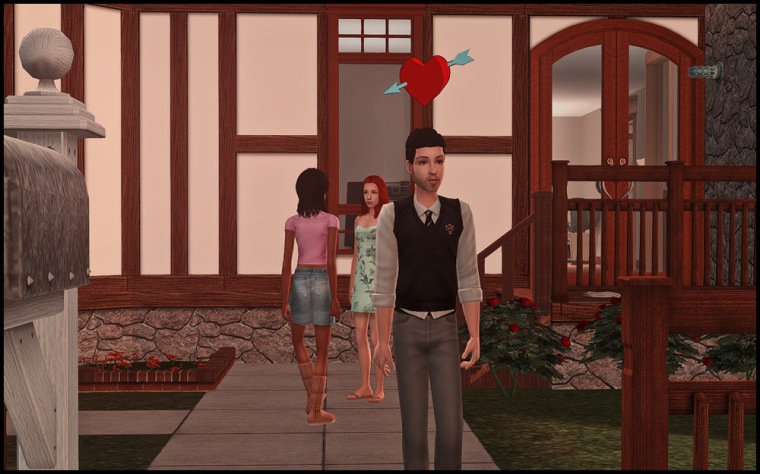 Alex leaves, falling in love with Thelma.  Both girls get points for meeting someone new (Thelma) and now they both want to be friend with her.

Daniel is the first Permaplat in the town.  The family has money now, but not enough for him to retire.

Acne cream followed by a want to earn a charisma point. 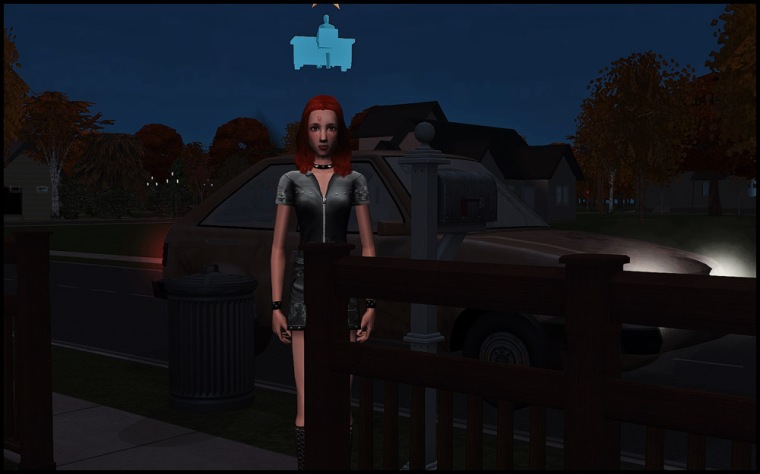 She (Lilith) then heads off to work and comes home with her final teen promotion.

Angela starts off with a call to Thelma and Lilith calls her afterward.

Both girls become her friend.

Final dinner as a family.

Mary-Sue is now an elder.

The twins wake up Monday morning and head off to University.

I took a chance and just ignored all of Daniel’s love wants unless they could be used on Mary-Sue.  He finally matured after he turned to elder and wanted to do new things.  Most of his time was spent romancing Mary-Sue.

Mary-Sue had a lot of buy me/skill me wants.  So, she spent her time skilling.  We leave with an interesting assortment of wants.

Angela:  Just wanted to talk on the phone, be friends, be best friends with and had random skilling wants.

Lilith:  Same as above.