We have returned for Spam’s birthday.

Nancy is ecstatic to have one less toddler hanging around making messes.

I never did show off the fenced in backyard for Ziggy and Bubblegum.  They cannot use the front door at all.

Some lady died too close to the trailer, so Nancy ran straight out to put a stop to it.

Nancy then proceeded to piss herself, cementing the fact that she does fit in to the trailer trash world.

The toddlers are mostly left to their own devices.  Rusty hates kids and Nancy is too mean to help them out. 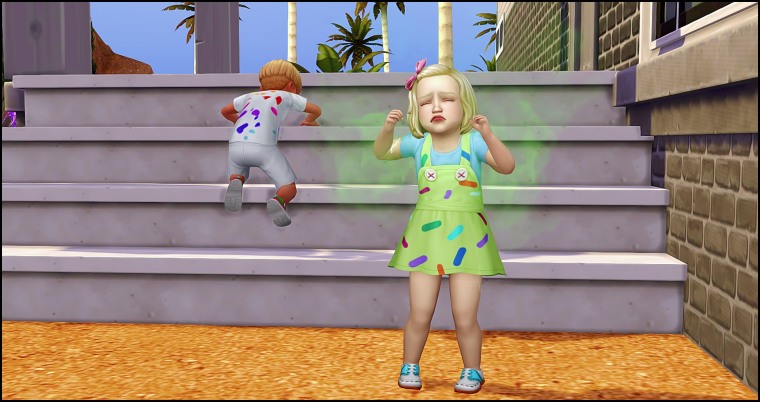 This is the norm around here. 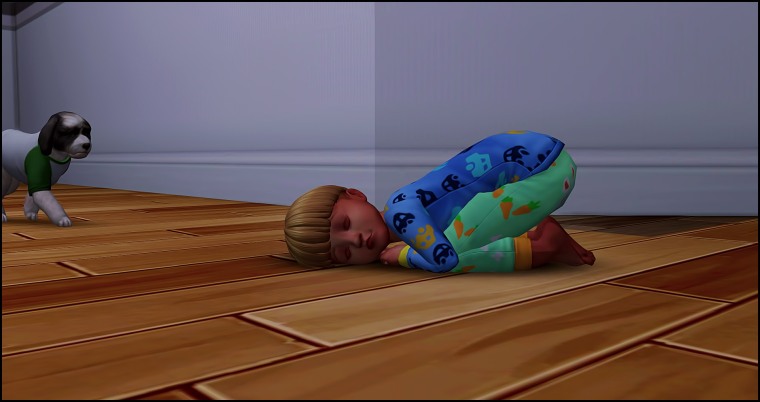 Betty Sue had another nightmare and that evil look on her face is the one she always has when she knows she can wake up her daddy and piss him off. 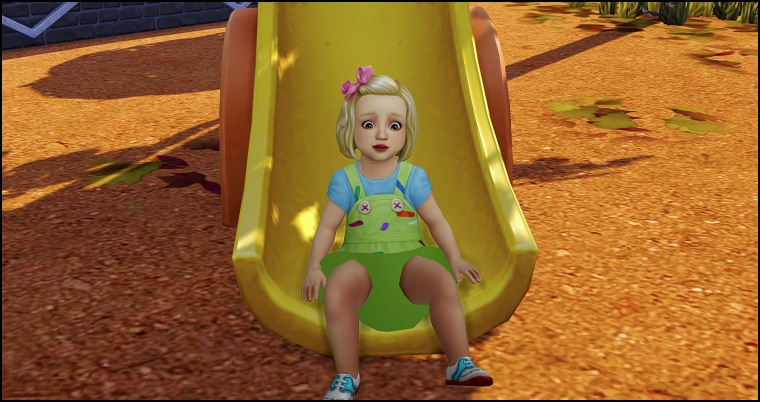 She spends the day on the slide.

Topped off with being defiant. 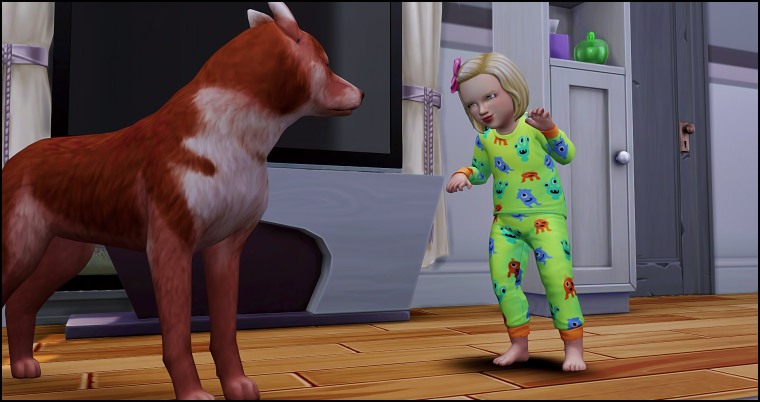 Being mean to Ziggy.

Hitting Nancy and being yelled at. 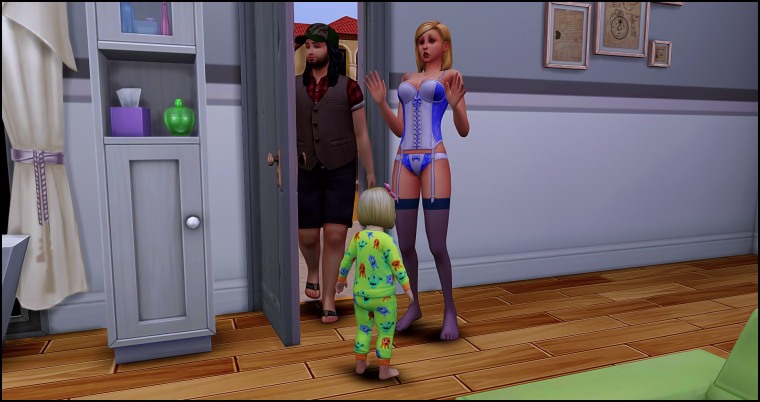 Then hitting her again. 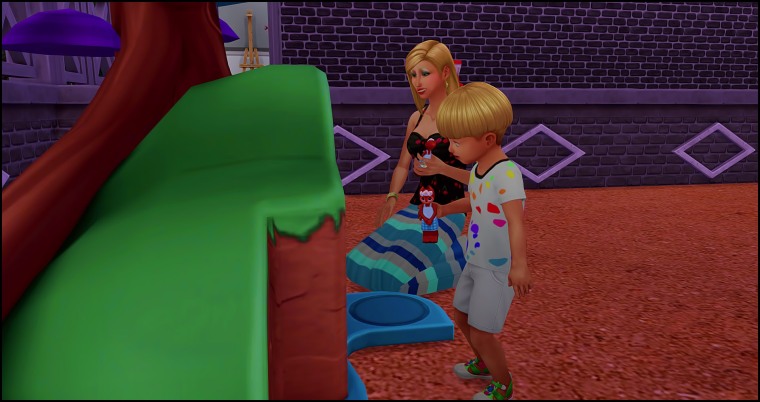 Bubba Ray somehow gets Nancy to play dolls with him.

Have we not had a good pic of Spam as a child?  It’s probably because he has to sleep in the other trailer and only comes to the main house for food and the bathroom. After she yelled at him, Rusty laughed at her and led Erika to the bed.

Nancy is not amused in the slightest.

That’s the look of someone plotting her revenge.

Nancy is in the back dancing herself into a huge mad, Rusty is taking Betty Sue somewhere (probably to bed), and Erika cleans the house. Bubba Ray gets a bath from Rusty, who is not happy to be doing it. 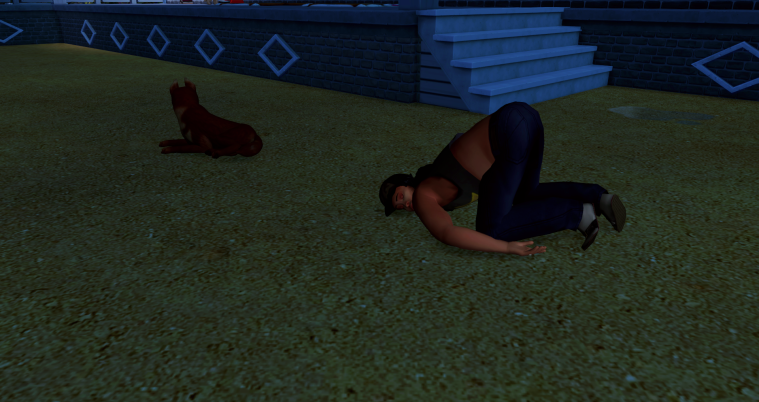 After caring for the kids, the dogs, the garden and going to work, Rusty takes a dirt nap. There is something wrong with Bubblegum and off to the vet they go.  After finding out from Teresa that dogs can auto-TFB, Bubblegum gets fixed while they are there.

It’s Harvestfest.  Nancy appeases one gnome, but Spam did not.  In fact, that gnome electrocuted him six times before he gave up.

He then finds himself in his own trailer and he manages to appease a different gnome.

Instead of appeasing the gnome, Rusty kicked it and pocketed the gem.  Rusty, not realizing what he has done, amuses himself by fixing the toilet.

Looking in on Nancy, we see her red with rage.  No one is quite sure why either.

She beat Blaarfy to death over and over again.

Then she hunted down Rusty and let him have it.

Her attack was the last straw in Rusty’s eyes.

Rusty, ill with some sort of poison, felt Nancy’s hands reaching for his neck… She knocked him to the ground before he had a chance to defend himself and she started punching him in the face.

Nancy had never been this enraged in her life.  She had no clue what had come over her, but by then it was too late.

Nancy becomes the first sim to die of anger in my game.

Nancy’s last words:  My will leaves every penny I have left to Malcolm.  Kiss my ass, jerkoff.

Rusty was sick, stinky, and dazed from having his ass handed to him by Nancy.  The only saving grace was that no one was around to witness his humiliation.

Now, how was he going to support all of these brats with no money? Heading back to the house after several hours in the other trailer, finds Bubba Ray passed out on the floor smelling like a four day old dirty diaper.

Rusty barely had enough energy to bathe the little guy before passing out.

The tv is now broke thanks to Spam.  It is put away and replaced.

With Nancy gone, Rusty can only sit back in an exhausted heap and let the kids run wild.

Bubba Ray is a menace to every room he enters.  It doesn’t help that he sees Bubblegum’s interest as encouragement.

In other news, tomorrow is Betty Sue’s birthday.  In even happier news, if she can finish this potty, she will finally be done and will be ready for her birthday. 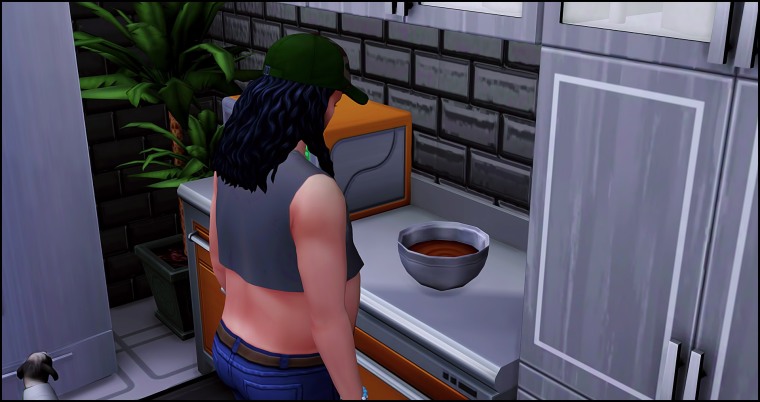 In preparation, Rusty makes her a cake.

Betty Sue, after being queued up for three potties on a row, is horribly upset about the mess.

She tries to go to bed, but Rusty wakes her up for cake and ignores the dirty, mess making toddler right behind him.

Speaking of that toddler.  He has every bad moodlet a toddler can get.  How the Social Worker wasn’t called, I’ll never know.

He is too upset  to go potty like a big boy, so he craps himself.

The babies are off to daycare.  While Rusty is at work, Spam and Betty Sue clean the whole house.

Ziggy continues to have all his bad habits trained out. 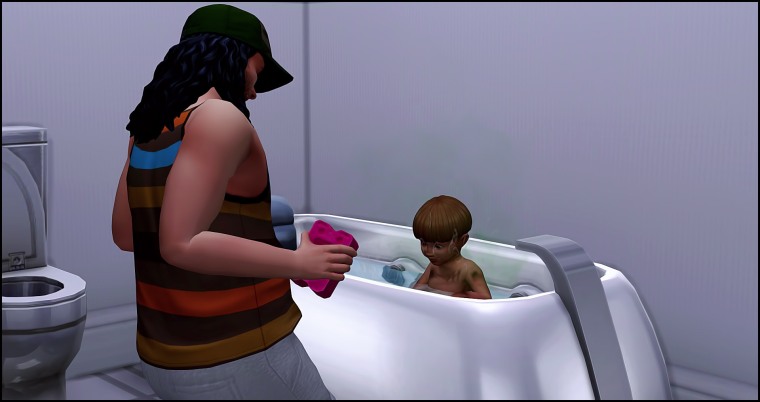 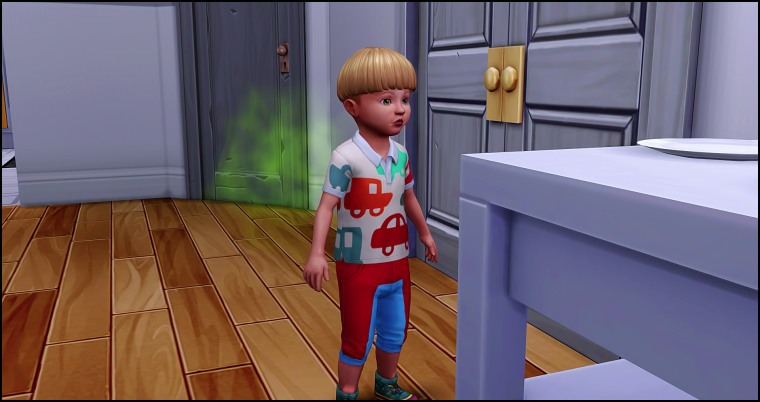 How the hell am I just now remembering that there are two with the same haircut?  One is Bubba Ray and the other Bobby Joe.  They look identical even though they have different fathers.  So, I’m pretty sure they are mixed all up through this update, seeing as there are only about 24 hours between them.

Promotion for Rusty came through.

The house continues to be spotless thanks to the efforts of Spam and Betty Sue.  They have autonomously each gotten two or three scout badges on their own. 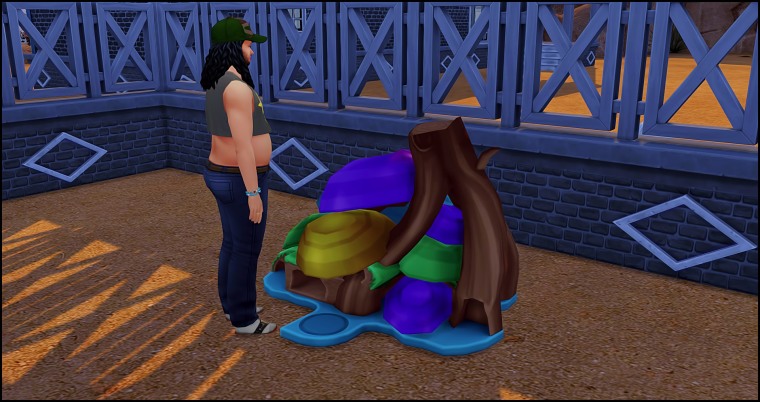 Rusty has a new habit of coming home from work, taking a look at the four kids he is raising, and then goes out to destroy the dollhouse.

After repairing the dollhouse, he is then ready to do bath time. 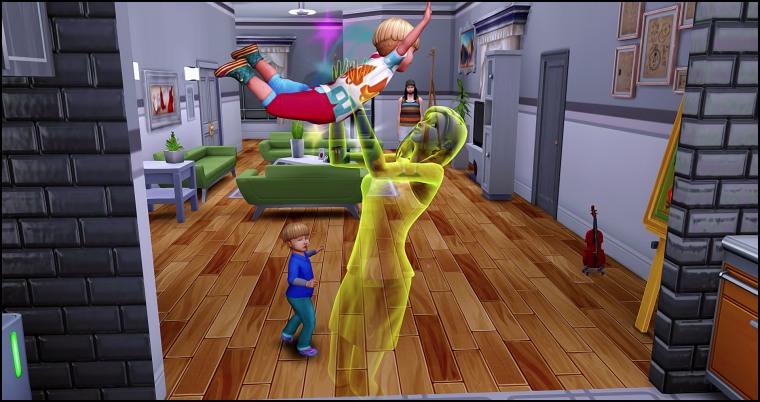 Nancy came out and played with one of the boys.

Her other son is devastated that she won’t play with him too. 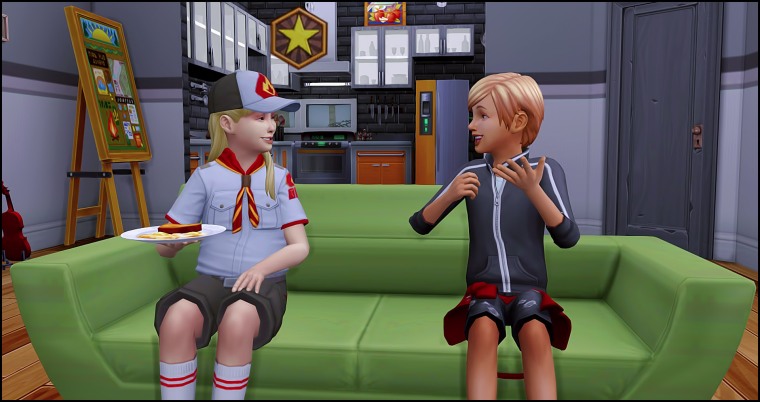 Since their bars are all happy and green, I went ahead and had them both be rude to each other and then apologize to work on their next badges.

Erika calls up Betty Sue wanting to visit after the scout meeting and Betty Sue gets to meet her mom for the first time since she was born.

Rusty gets another promotion and celebrates with Erika.  A very married Erika.

So, when Rusty got home from work a few days later to find a squalling brat had moved in, he was pissed.

More proof that Bubba Ray and Bobby Joe were two separate entities.  Here they are plotting their revenge against a new baby brother.

Rusty:  Must you watch me take a shit? 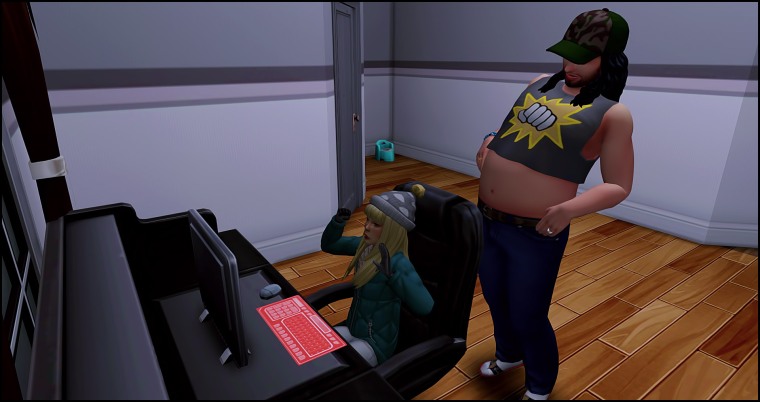 Rusty:  Good job doing the dishes, little lady.  You’re gonna make a fine wife to some poor sap.  I’m glad to see you know your place in the world.

Betty Sue:  Screw you, dad.  A man can cook and clean just as well as any female.  I plan to go to college and rule the world while you sit in your dirty underwear impregnating the dumbshits that live in this trailer park. 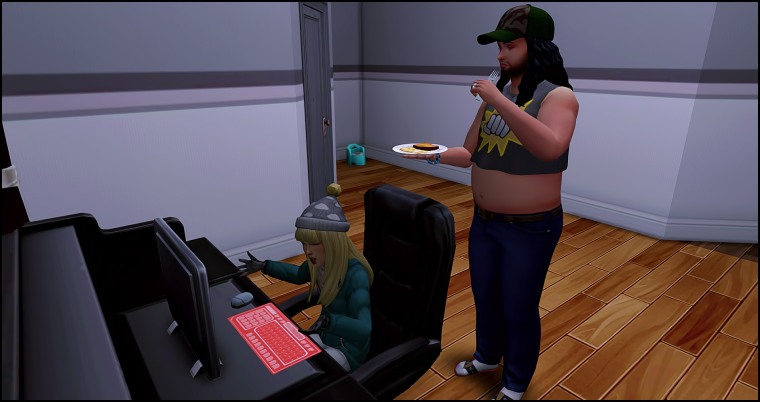 Rusty:  I have another plate for you to clean. 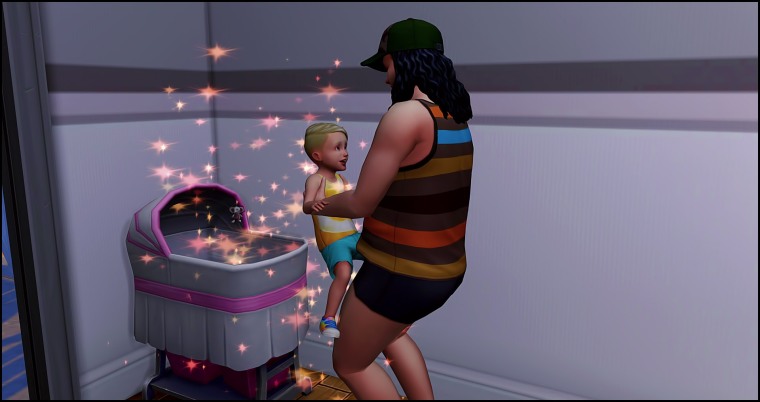 Jim Bob got dropped off just in time!  One more day and he would not have been living here.

Bubba Ray knows it’s his birthday and he has no chance to be a happy toddler.  In fact, he never even learns to fully potty. 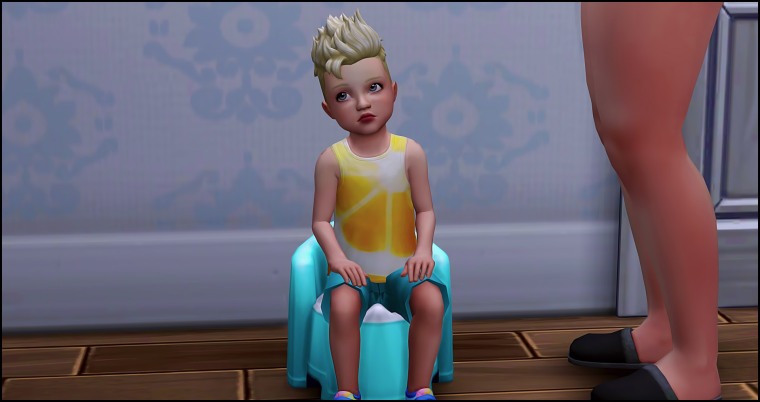 Jim Bob had to poo, so Rusty plopped him on the toilet before putting him to bed. 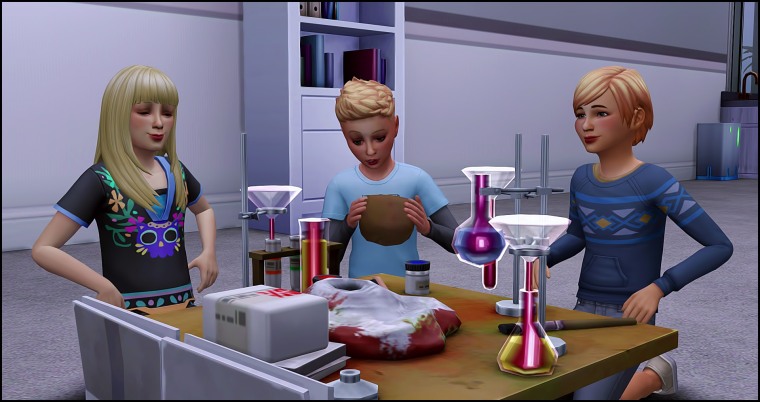 Bubba Ray did indeed have his birthday.  No one remembered, so he is sad that he didn’t get a cake.  He joins his siblings in the scouts, does his homework and helps them with their school projects.

Bubba Ray still has three hours until he gets over his missed birthday.  Get used to it, kid.  No one around here cares. 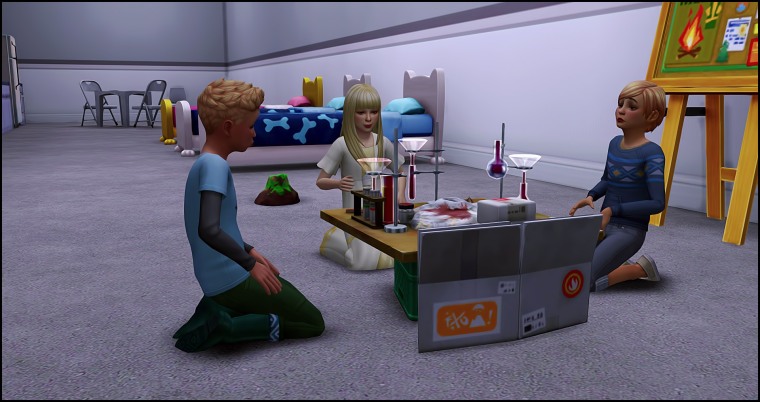 One more school project before bed.

Also, the woman that was saved by Nancy, Rania, died again in the same spot.  She now is close enough to haunt the house.  She keeps stealing the kids’ beds.

Rusty tucked in Jim Bob and then tucked in the bastard child of his ex-wife.

+1   Shotgun Wedding/Parties
+2   For the founder and every heir that marries while they or their spouse are showing a baby bump.
+5   If the baby is born before the wedding party timer runs out!
+5   For a Normal start.
+4   (+2) For each legitimate pregnancy.
+9   (+3) For each illegitimate pregnancy.
+30 (+10) For every 6 x 20 trailer on the lot! (Doublewides would count as two).
+10 For every 3×3 or larger lot the family owns as “hunting land” either in the neighborhood or in a vacation ‘hood.
+10 For having at least two dogs living on the main lot before the first heir is a young adult.
+1 For each dog that was adopted in as a stray.

Total: 77 (counted wrong the first chapter, cuz I is gud at maths.)