Last time we met the five kids that came from five different births, making our alien abduction a meaningless pregnancy. 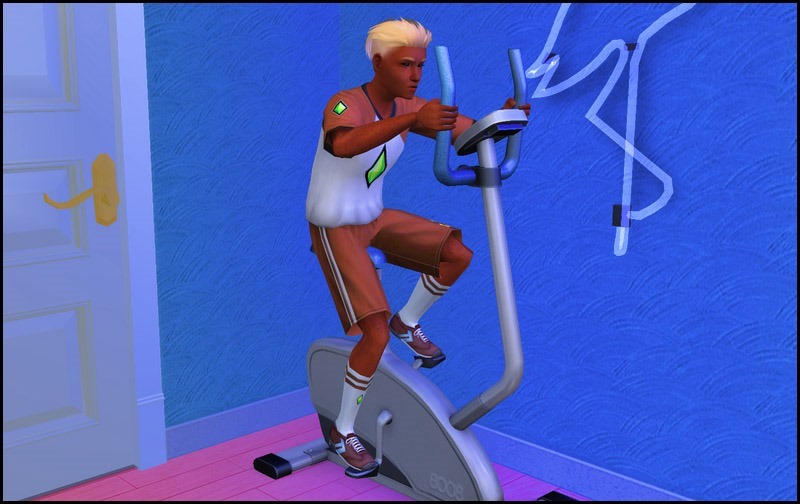 The oldest is Funyun.  He is addicted to the exercise bike.

Omg.  Hank and Bubble are still getting on my last nerve. 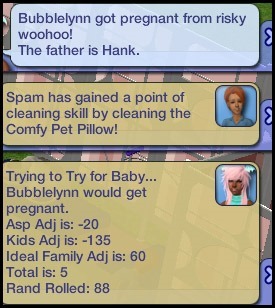 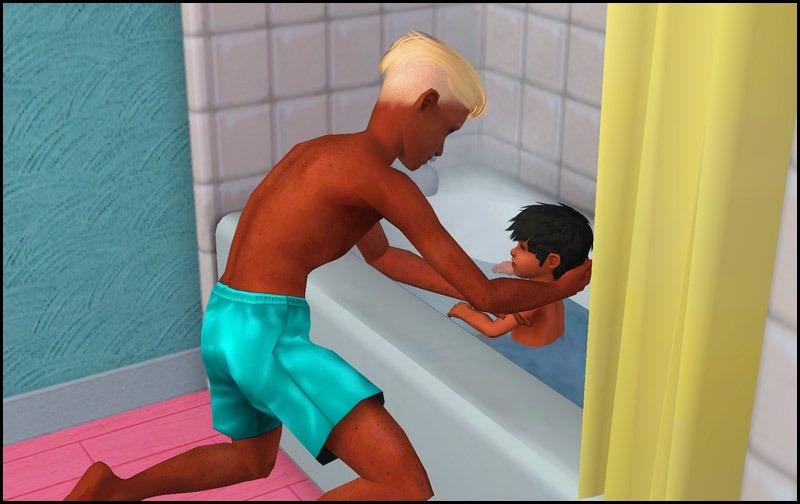 Bubblelynn has to distract Funyun off the bike.  He then proceeds to bathe both toddlers.  Yay.

The second child is Velveeta, the only girl so far.  Her step-dad is Hank, who finally got what he wanted in the sack and is now able to teach the third child, Spam, to study. 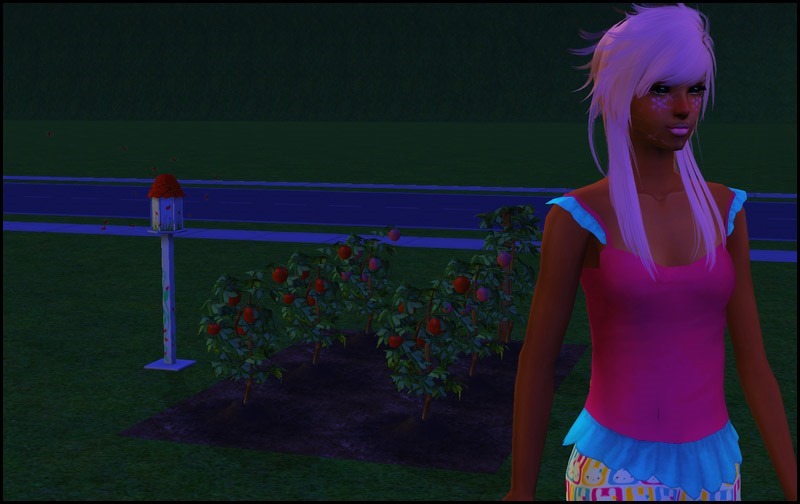 Hey, you’re not done in the garden! Get back and harvest our first crop of tomatoes that are actually really, really pretty.

They still have never had to get groceries and I plan on that to never happen.

Bubble:  You are going to kill yourself on that thing!
Funyun:  But it’s so fun!

Spam had a want to go hiking, so Bubble took him. 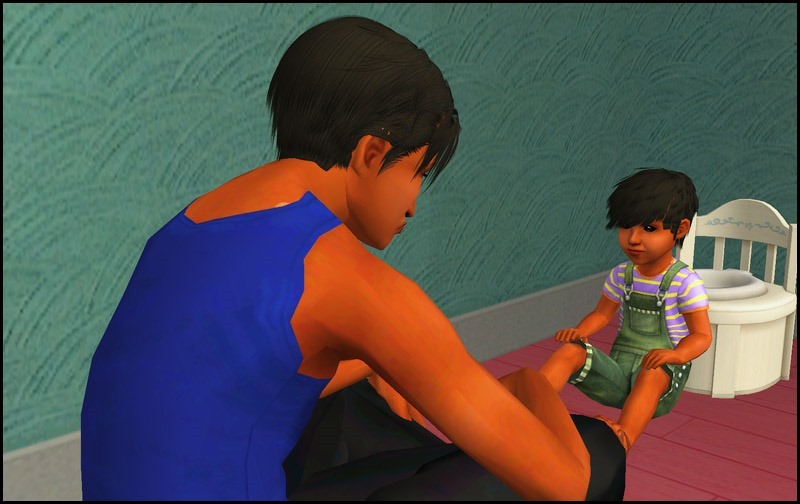 Keeping these kids fed is a full time job.  I’m always getting a pop up that a kid or dog is starving to death.

Bubble:  What did I tell you about riding the death machine?  Get off! 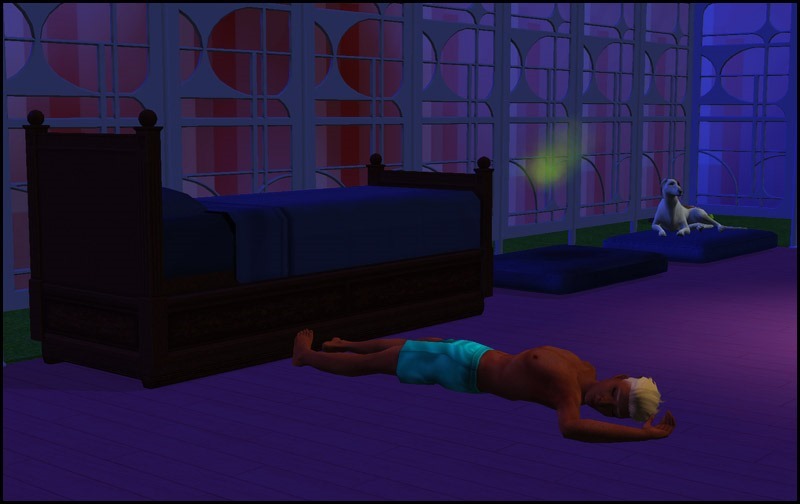 Bubble:  This is why you should listen to your mama.

It’s an endless cycle…..no pun intended.  LMAO  I crack myself up without meaning to.

Eight million years is all it took for Bubble to get her Max Nature enthusiasm want done.

She celebrates by taking all the kids to the fishing hole and leaving Hank with the toddlers. 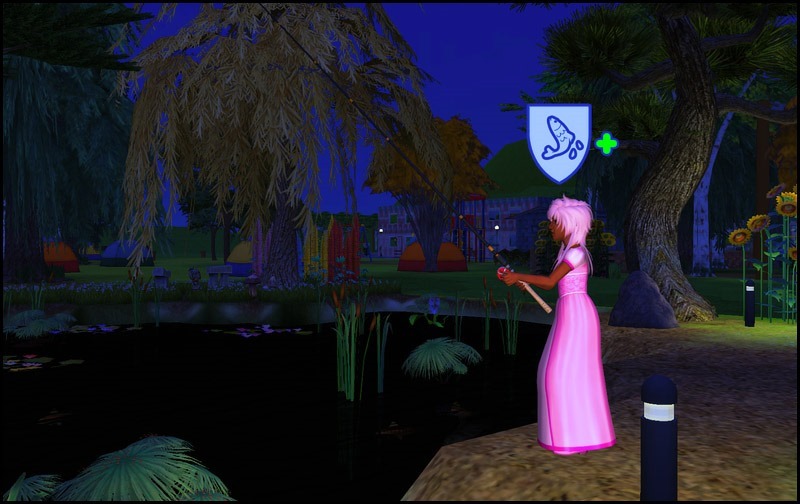 She convinces them all to start fishing before running off.

She had to get her generation photo taken.  It took four tries because they refused to show up in her inventory.

Back home again, they get started on nursery rhymes.  The house also got rearranged.  The cribs were put away for the next birth.  The boys have their own section, and the bike is in the old crib area. 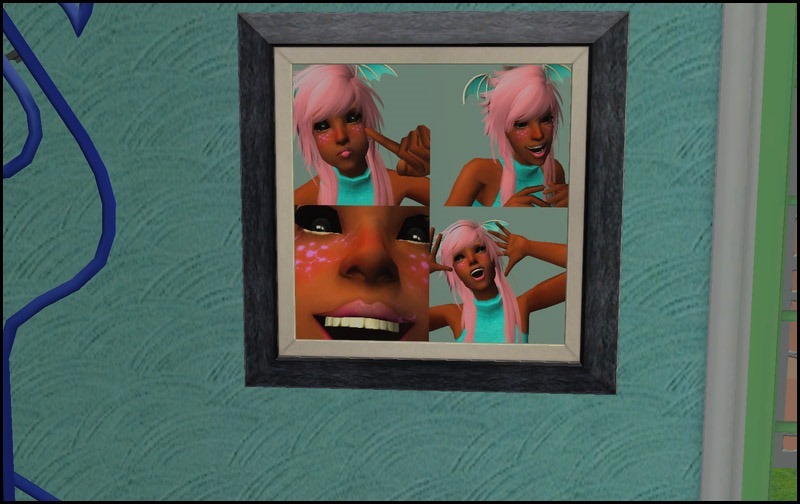 The picture does make it to the wall.

Velveeta ages up into another pink outfit.  She’s such a favorite of mine.   Sadly, she rolled Knowledge and is not up for heiress.

Smelly or not, these two are the bestest of buddies with no help from anyone in the family.  Bubble convinces them to have puppies.

Velveeta uses one of her commands to get the alien scholarship.

The bitch has twins.  Omg.

It’s our second yard sale.  It took me two summer days of me forgetting until like 11am, so this is a treat that I got there at almost exactly 7am. 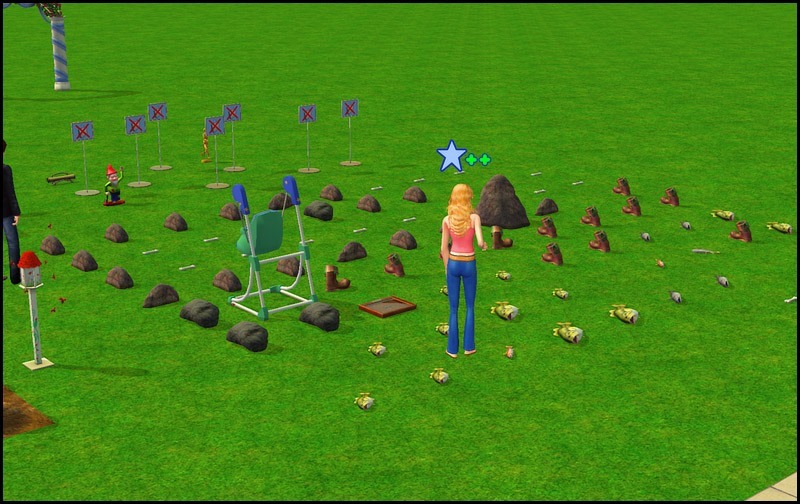 After all the good stuff sold, the junk was brought out.

*Note:  All gnomes are accounted for, so the one pictured may have been dug up.  I unclicked it for sale just in case and added it to the growing gnome army to be on the safe side.*

Halfway through the day, Bubble had to go to work.  This left Hank home alone with four kids and a yard sale.  To say the day was a disaster is an understatement.

Ban-Tor ages up and I seem to have not gotten a pic of Pork Rind.  Oops.

I finally checked the fruit punch thing and was finally able to get rid of it.

Bubble had the whole family join her for fishing. 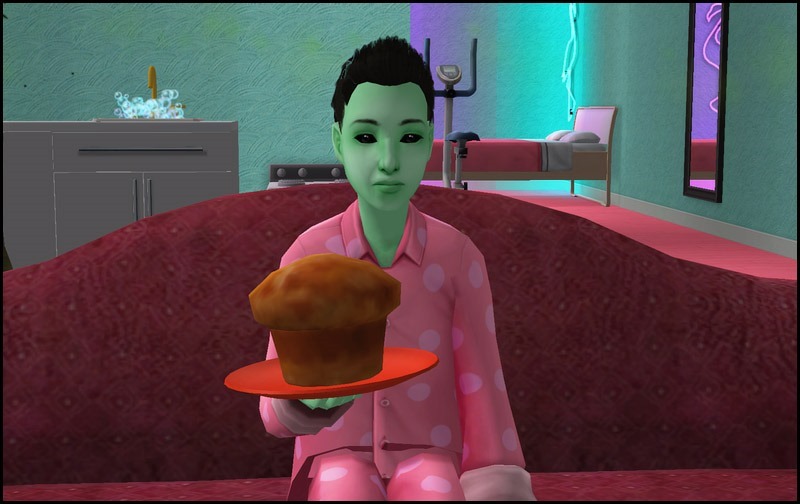 Ban-Tor becomes the first kid to ever get a great muffin.  Oh, and the sink is acting up.  It will have to live like a bubbling mess until the next yard sale.

Bubble gets as far as she can in crime, but luckily she can’t get any higher.  She lacks the creativity skill needed.  Yes!

The twins aged up!  Frito Pie (top) is our second girl and Cheez-Whiz (bottom) is her twin brother.

Bubblelynn comes home from work and ages up to elder.  It was a sad day.

She gets Ban-Tor to study first thing.  Velveeta uses a command to study something. 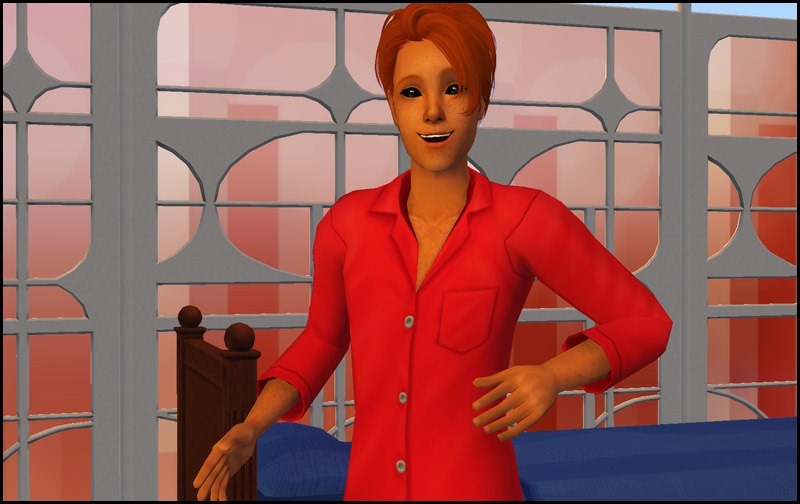 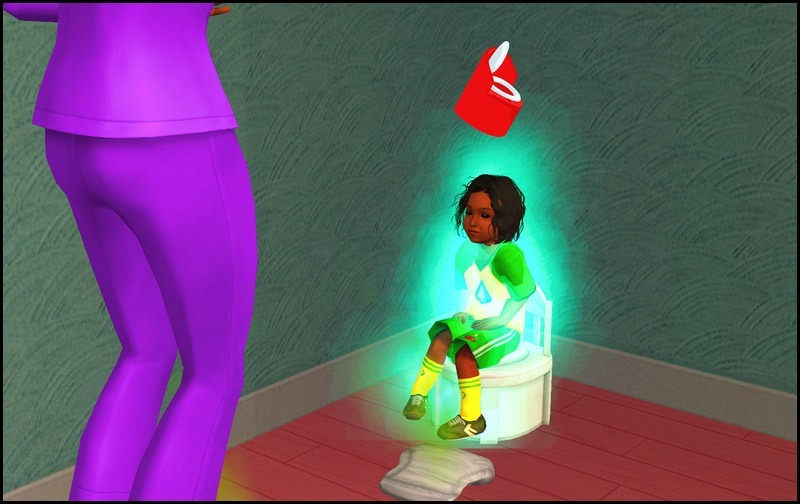 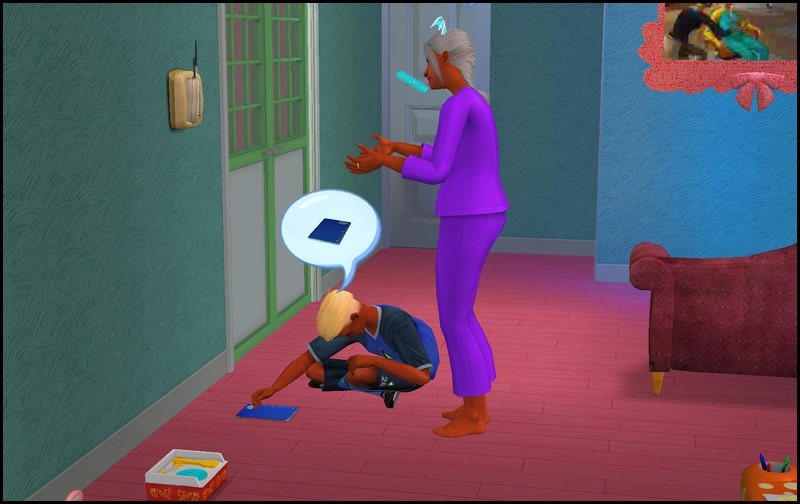 Bubble seriously does everything by herself anymore.  She got Cheez Whiz to potty and got Funyun to do his goddamn homework. 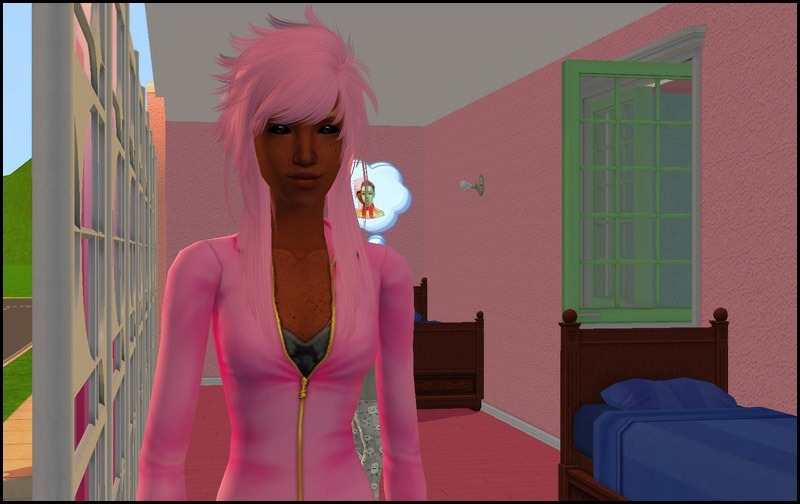 Velveeta takes her three scholarships and escapes to university.

I’m not sure who brought home Ophelia Nigmos. 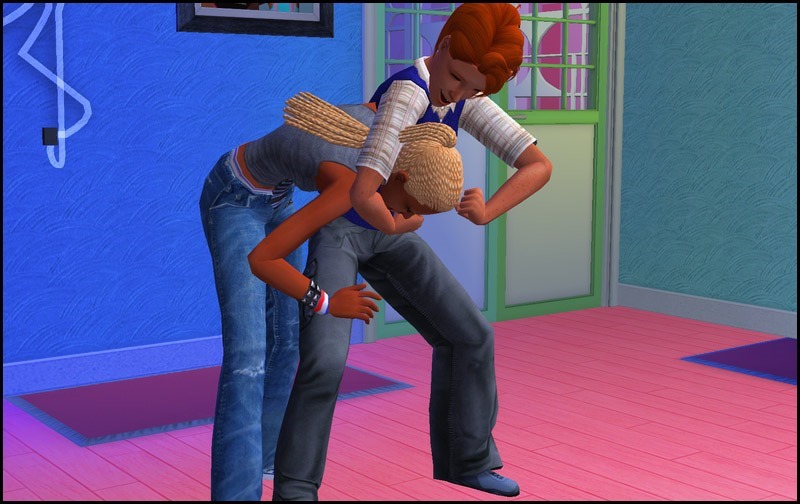 But Spam spent the whole evening making an enemy of her. 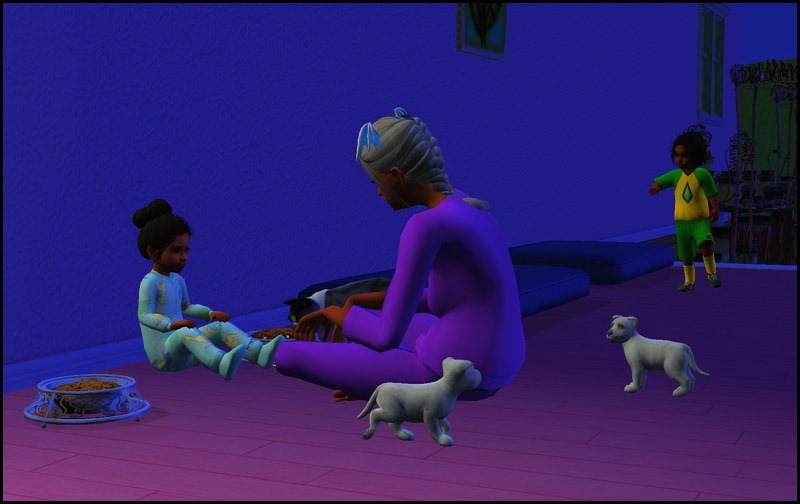 Bubble is still training the twins all on her own, while keeping six dogs fed.

Since she had to skill them on her own, the twins literally aged up just minutes after Cheez Whiz learned his last skill. 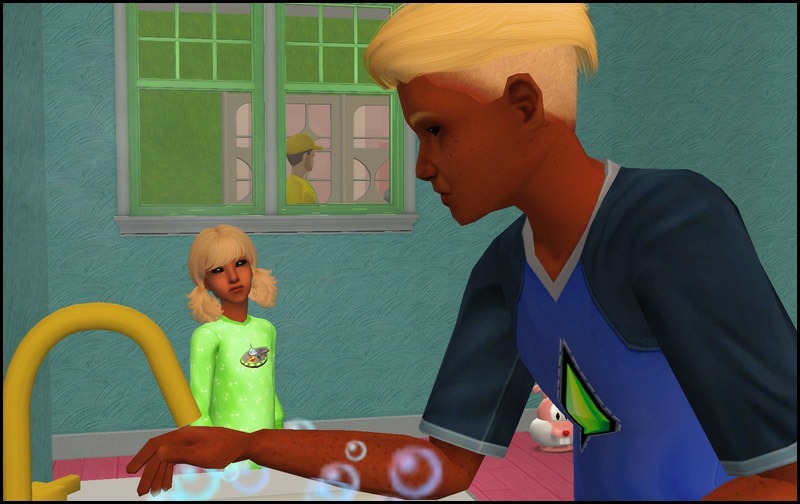 I have no clue why this pic was taken….Oh!  That’s not Dakota.  It’s puppy birthday time.  Spoiler alert:  They all look exactly like Dakota.  There was one male and three females: Killer, Brandy, Lady, and Missy.

The place is a madhouse.  Hank gets Funyun to do his homework and then moves on to the rest of the kids.  Bubble brought home Bob Newbie from work. 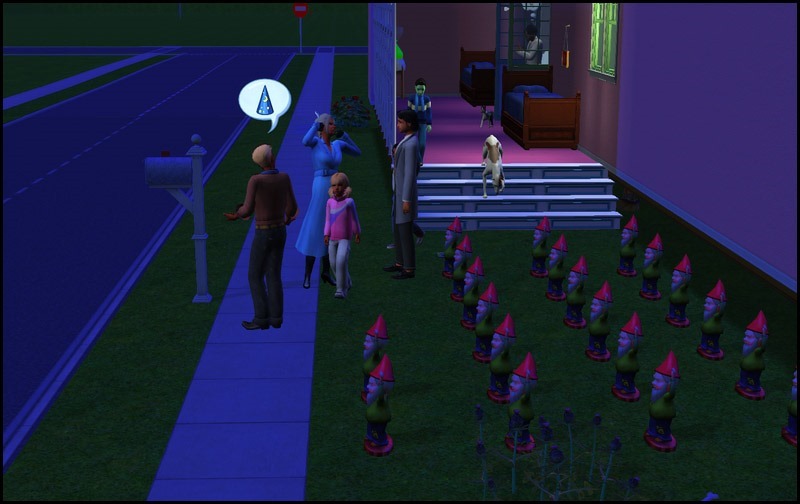 The gnomes are taking over the world!  Also, kids are now sleeping outside.  I an trying to get Hank to age up using the Elixir.  So far, he should be an elder in two days.  It’s not like he’s useful or anything.

I didn’t know it was missing.  Thanks, Ban! 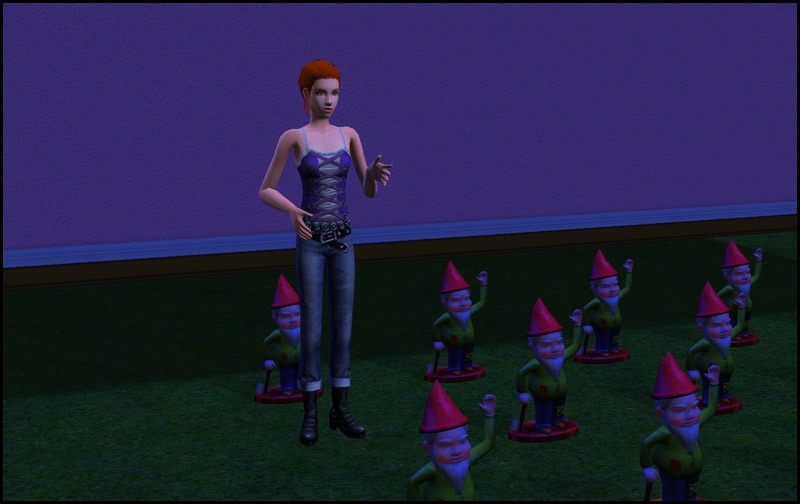 Aha!  She’s stealing them and we are getting them back almost immediately.  This is Hermia Capp. 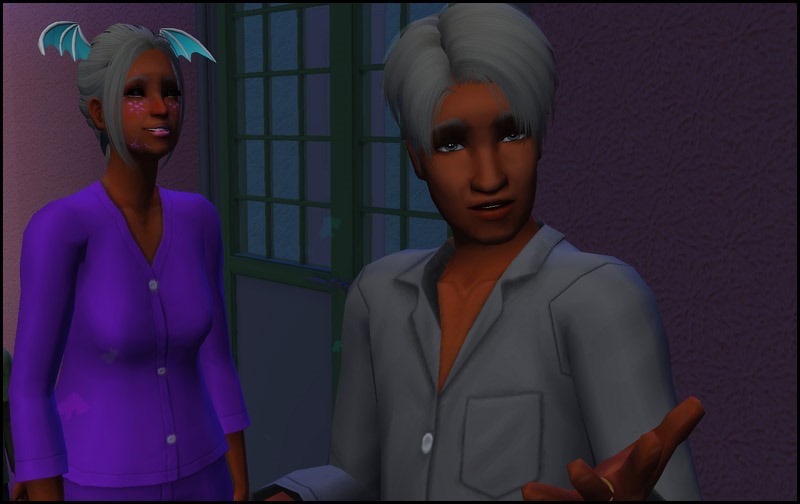 Hank become an elder, as planned.

He’s not on the menu! 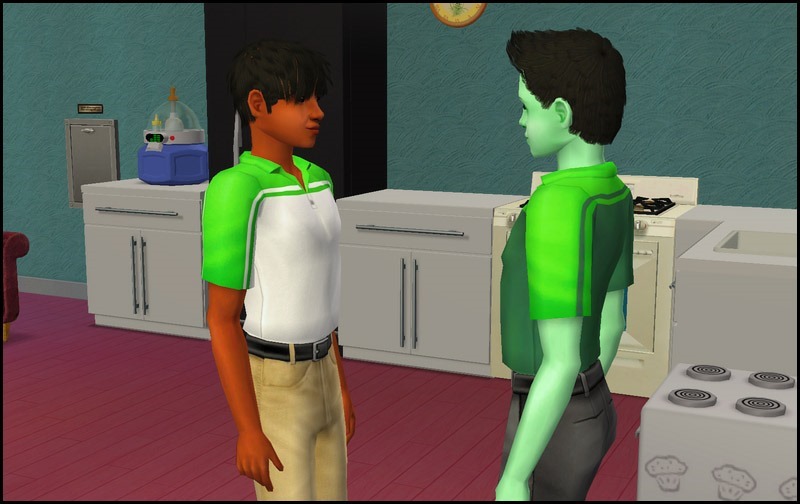 These two tend to prank each other all day long.  Instead of being a negative, it has made them each other’s only friend/BFF.

Funyun minds his own business mostly.  He maxed his athletic enthusiasm and I put the exercise bike outside for sale.  He now spends his time watching tv and entertaining the dogs.

Spam his the most hated in the house.  He is so mean.

I can’t believe not a single one looks like Bubba.  I can’t wait to start moving them out with spares. 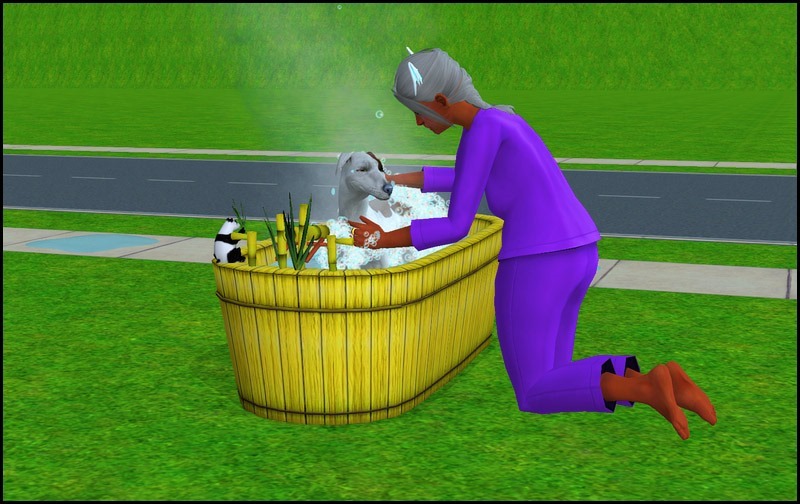 Bubble called in sick to work.  Saturday is dog wash day.  It takes several hours to bathe six dogs (and praising each one after).

This is about the time that I realized Funyun was two days to adult and had an emergency stoppage so that we can have an heir poll, which will be posting up right after this one.

While the poll is going on, I am going to play Velveeta to the last semester of college.  As long as Funyun stays older than her, I will not worry too much on keeping aging correct,  i.e. I can’t remember how much older Funyun is.  It’s probably not more than five days.

Neighborhood info:  I am using Uberlicious by SleepyCat.  I love this neighborhood.  It has remakes of all the original sims, plus the older ancestors that I never met.  I think the Pleasant twins are child sized, for aging reference.